We write for people looking for the best health and wellness gear (not for brands). All products and services are independently selected and tested to provide recommendations you can trust. You can read more about our process here. We may receive commission on purchases made from some of our links, but that’s not why we’re here. We just want to help you find good stuff.

If you spend enough in the various corners of the wellness world, it won’t be too long before you stumble upon mushroom coffee. This is a kind of coffee that combines traditional coffee beans with medicinal mushrooms like lion’s mane and chaga to bring benefits that (according to most mushroom coffee brands) you don’t get with regular coffee, such as increased mental clarity and physical energy. In a test of the best mushroom coffee, I tried a lot of options, including La Republica, Rasa, and Ryze. Our favorite ended up being one of the most popular brands in the caffeinated fungus drink market (a surprisingly competitive space): Four Sigmatic’s Instant Mushroom Coffee with Lion’s Mane.

Ness believes this service and/or product has a health benefit.

Read more about we use The Evidence Test. 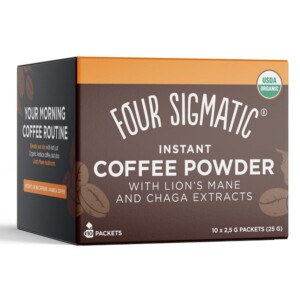 What Is Four Sigmatic Mushroom Coffee?

Four Sigmatic first launched in Finland in 2012, and landed in the U.S (in L.A., obviously) in 2015. The brand’s founder was inspired by the stories of his grandparents brewing mushrooms during World War II when they couldn’t get coffee. A “sigma” refers to how far something is from the average, and Four Sigmatic aims to live up to this definition by focusing on products that contain the most nutrient-dense foods. The brand purports that everything it sells is “four degrees beyond average” when it comes to nutrition—a claim that’s tough to verify but is definitely an admirable goal.

Four Sigmatic’s mushroom coffees are among the most highly rated mushroom brews you can buy. I tried (and loved) the Four Sigmatic Instant Mushroom Coffee with Lion’s Mane. I was able to name it best overall largely because it tastes really damn good, contains medicinal mushrooms that have solid nutritional benefits, and is easy to brew. (It’s instant coffee, so all you have to do is mix it with hot water.) It also checked off enough evidence-based boxes for us to classify it as “healthy,” especially for people who already drink coffee. It costs $15 for 10 servings or $12 for 10 servings with a monthly subscription.

I haven’t tested other Four Sigmatic mushroom coffee brews, but you can buy them with other mushrooms like reishi, cordyceps, and chaga, plus an assortment of added vitamins. In addition to instant coffee, Four Sigmatic sells grounds and whole beans that can be brewed in a French press or regular coffee maker. You can also opt for non-caffeinated protein and cacao drinks.

What Does Four Sigmatic Claim Its Lion’s Mane Coffee Can Do?

Four Sigmatic claims its Instant Mushroom Coffee with Lion’s Mane will wake you up and help you focus without the typical jitteriness of a standard cup of coffee. Each packet of instant coffee, which is enough for one cup, includes 250 milligrams of lion’s mane mushrooms and 250 milligrams of chaga mushrooms. In a 2013 study, researchers found that lion’s mane Antioxidants (Basel) “Lion’s Mane Mushroom, Hericium erinaceus (Bull.: Fr.) Pers. Suppresses H2O2-Induced Oxidative Damage and LPS-Induced Inflammation in HT22 Hippocampal Neurons and BV2 Microglia” View Source has antioxidant and anti-inflammatory properties that potentially reduce oxidative damage, which may protect you from developing neurodegenerative diseases.

Each packet also contains 50 milligrams of caffeine, about half of the amount of a regular cup of coffee.

What Does Four Sigmatic Lion’s Mane Coffee Actually Do?

While testing this mushroom coffee, I found that the lion’s mane brew lived up to most of its purported benefits. Because it’s a half-caf option, we didn’t feel those typical jitters that come with a morning cup of Joe. And it tasted good, too, which isn’t the case with all mushroom coffees.

In addition to the potential benefits of chaga and lion’s mane, consuming moderate amounts of caffeine can be beneficial. An umbrella review of meta-analyses of the health impacts of coffee consumption found that it was more often associated with benefit than harm BMJ “Coffee consumption and health: umbrella review of meta-analyses of multiple health outcomes” View Source —consumption was linked to a lower risk of some cancers and neurological, metabolic, and liver conditions. On the harmful side, coffee consumption was associated with lower birth weight and higher risk of pregnancy loss and bone fractures in women.

Studies have also shown a lower risk of heart failure American Heart Association Journals “Association Between Coffee Intake and Incident Heart Failure Risk” View Source in people who consume high amounts of caffeine, or about three to five cups a day. However, high caffeine consumption Mayo Clinic “Caffeine: How much is too much?” View Source (more than 400 milligrams a day, or about four cups) can also cause headaches, insomnia, muscle tremors, increased heart rate, and a sense of nervousness and irritability. Your own mileage may vary depending on your typical caffeine tolerance.

How Will You Feel When You Drink Four Sigmatic Mushroom Coffee Mix?

I wasn’t jittery, but I also didn’t feel extra focused (beyond my daily norm), despite the brand’s claims. There also isn’t much evidence that mushroom coffee provides energy or focus you can’t get in a regular cup of coffee—we found one study that cites potential antifatigue benefits in some edible and medicinal mushrooms BioMed Research International “Antifatigue Functions and Mechanisms of Edible and Medicinal Mushrooms ” View Source , but more study is needed to say for sure. Instead, the Four Sigmatic coffee simply provided a way to maintain a normal coffee routine with fewer jitters and more potential immune benefits. I’ll take it.

What We Like About Four Sigmatic Lion’s Mane Coffee

My fellow testers and I found that Four Sigmatic’s Mushroom Coffee with Lion’s Mane had the best taste of all the coffees we tried. Some brands were too herbal, while others tasted oddly chemical. Four Sigmatic’s mushroom coffee mix tasted more robust than the other coffees I tested, and it carries a chocolate-y quality. While it’s less full-bodied than a typical cup of French press option, it still satisfies that coffee craving. Because this version is instant, it tastes a bit thin. (Think camping coffee, if you’ve ever been camping. If not, just imagine a decent, if slightly watery, cup of coffee.)

We also liked that compared to other brands, Four Sigmatic is transparent about the amount of caffeine and percentage of mushrooms present in its brews. And unlike some of the other options, which lacked in the area of providing clear brewing directions, Four Sigmatic’s instant coffee was as easy as adding grounds to hot water. Though pricier than a standard bag of coffee, its price is also much less expensive than buying a daily cup of coffee, and comparable to the other brands in the mushroom coffee space. Four Sigmatic’s variety appealed to me too. I like the idea of hopping around different mushroom options and brew styles while knowing the Lion’s Mane version is always safe bet, taste-wise.

One thing gave me pause (a big one) about Four Sigmatic: the Proposition 65 warning label that appears on all its products. The label states: “Consuming this product could expose you to chemicals including lead which is known to the state of California to cause birth defects or other reproductive harm.”

However, this label doesn’t mean that Four Sigmatic contains lead. (Which would, needless to say, negate its purported immune benefits.) It’s a common, albeit alarming, label that does not always indicate high risk; lead exposure comes from many different sources. In Four Sigmatic’s case, some mushrooms may have been exposed to lead, but the risk is no higher than consuming other mushroom-based products. The warning label is a California state requirement, not an indication of a high-risk product. However, certain populations, like pregnant people, should be aware of these risks and take extra caution.

Finally, though we think Four Sigmatic’s Lion’s Mane coffee is generally healthy for most people, don’t go overboard with the stuff. We recommend letting your doctor know if you start taking it. As with most supplements, there’s no recommended daily allowance for lion’s mane or chaga from a federal regulatory organization such as the FDA or CDC, so it’s important to pay attention to how it makes you feel in combination with your usual diet and lifestyle (and stop your consumption if you notice any ill effects).

Chaga Journal of Korean Medical Science “Development of End Stage Renal Disease after Long-Term Ingestion of Chaga Mushroom: Case Report and Review of Literature” View Source , for instance, contains a high quantity of oxalate University of Michigan Health “Foods High in Oxalate” View Source , a natural compound found in a wide variety of foods that can lead to renal failure if consumed in excess. If you’re adding anything with chaga—including this Four Sigmatic coffee—into your diet, do it gradually and don’t drink more than the serving size, especially if you eat a lot of other oxalate-rich foods such as beans, nuts, chocolate, and spinach.

Is Four Sigmatic Mushroom Coffee Worth It?

In my experience, buying and consuming Lion’s Mane Coffee from Four Sigmatic is, in fact, worthwhile. Good taste, good ethics, easy brewing, and beneficial mushrooms lead to a coffee experience that—while different from a typical cup of coffee—is no less satisfying. Research led us to conclude that mushroom coffee can be considered healthy for most people (especially those who already consume caffeine, and may be looking to reduce their intake).

So if you’re in search of a new way to start your day (because, lord knows, we all need some good vibes), snag a packet of Four Sigmatic’s instant Lion’s Mane brew. You’ll get a bit of caffeine to support your daily routine with a side of potential health benefits. What’s not to love?

Our research and review process is intended for informational purposes only—never as a substitute for medical treatment, diagnosis, or advice. Recommendations or information found on this site do not infer a doctor-patient relationship. Always consult a healthcare provider if you have questions about how a product, service, or intervention may impact your individual physical or mental health.

Our evaluations of products, services, and interventions have not been reviewed by the Food and Drug Administration. Information and research about health changes frequently. Therefore, some details or advice on this site may not be up-to-date with current recommendations.

The Nessie is an independent publication and is not in any way affiliated with the production or creation of products, providers, services, or interventions featured in reviews or articles on the site. 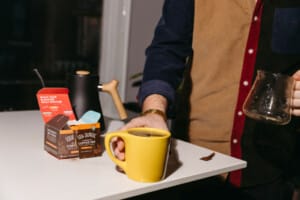 The Best Mushroom Coffee of 2022 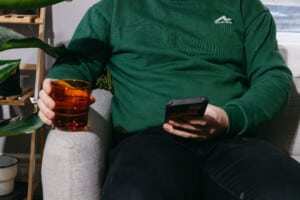 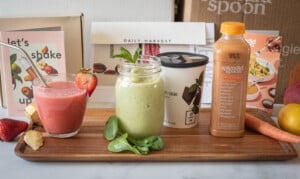 The 3 Best Smoothie Delivery Services for a Healthy Little Treat 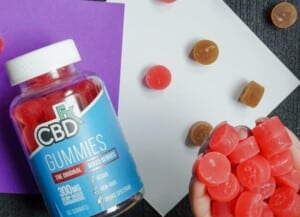 The 4 Best CBD Gummies to Try if You’re Curious